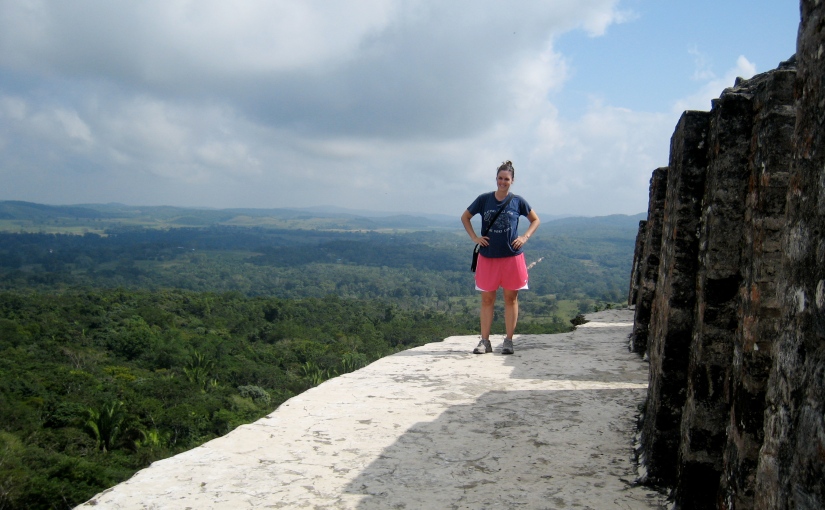 January Moved to Belize. *Carry-on bag wouldn’t fit in the overhead compartment. Attendant made me take out bulge on top, which happened to be a Ziploc gallon-sized bag of underwear. Held underwear on lap for duration of the flight.

Lived on an Iguana reserve. Learned how to do laundry with a hose. Experienced Belizean wedding and funeral in the same week. Set out to teach everything I knew about conflict resolution, drugs, and AIDS. Learned everything I know about love. Got accepted into grad school.

February Caught a parasite, hiked to the top of a ruin, swam in a cave, experienced my first Belizean election and confirmation. Fought a piñata. Lost.

March Overcame fear of spiders. Discovered a new love for choco-bananas. Played with a monkey. Met real Guatemalan Indians in Guatemala. Bought skirt from them. Watched the Ruta Maya river race. Said goodbye to the Caribbean. Understood that life would never be the same.

April Got a niece! Heart opened a little wider. Fell in love with her.
Turned 27. Panicked. Cut my own bangs.

May Got another step-family. Danced! Celebrated! Laughed!
First laid eyes on my new city, New Orleans. Stabbed my foot with a parking lot spike.

June Went back to work at Boys and Girls Club. Happy to find that I still loved the kids. Got shingles. Thought I was dying.

July Sold everything I owned on Craigslist. Moved out of Fort Wayne (ten years!) Received Carrie Bradshaw as a parting gift.

August Moved to New Orleans. Found the two-story target, which I had previously thought was an urban legend. Took a family vacation to Destin. Came back. Became acquainted with city life. Loved it. Went to Tulane for student orientation after a month of waiting. Got evacuated for Gustav at lunch.

September Stayed evacuated for two and a half weeks. Went back to school. Dropped ten pounds for lack of friends.

October Made friends! Gained ten pounds. Heard that Taylor Fort Wayne would be closing. Felt orphaned. Dressed up like a ninja and fought pirates on Jackson square.

November Watched history unfold in the TSSW building with snacks and wine. Found out Bry and Jess are pregnant again. Went to Belize. Delivered school supplies. Painted a cafeteria. Provided flood relief with two armed guards on the Guatemalan border. Became acquainted with Big Mac and Quarter Pounder, the tarantulas. Realized I had not overcome fear of spiders. Had the sweetest reunions I could ever imagine at San Marcos School.

Learned that a plan is usually unfolding around me even when I am not still or patient enough to see it. Discovered that if I feel lost even for a second, all I have to do is ask for help. Understood the beauty in a prayer that goes, “Hi God, I’m an idiot and I don’t trust myself. Could you make this one clear for me?” Trusted completely. Found out I am purposed. Convinced Tulane I am purposed. Doing last semester internship in Belize!