Alternate titles for this post: In Which We Stumbled Into a Student Choir In the Dark
or
It’s laining! Blooke! The lain! The lain over the rake!

Three days ago, the plantation director, agronomist, house lady and I sat around the kitchen table racking our brains on how we might obtain ingredients to make an “American” breakfast and dinner, per the request of Anastasi, the woman who cooks for us.

My fallback breakfast staple is eggs in a basket, which I call one-eyed sailors (gets a laugh every time), and French toast, because almost everybody has eggs and bread. Milk was an issue, but after two days of discussion, someone brought a few bags of whole milk from Gisenyie, and so the French toast plan came to life.

I asked if they had things like cinnamon or vanilla or syrup for French toast. When they didn’t understand me, I showed pictures on my laptop. I am still chuckling at the sight of everyone gathered around my laptop, scratching their heads as they studied a picture of cinnamon.  We don’t have, they said, totally puzzled. They didn’t recognize the picture of syrup, and I could never really explain what it was to satisfaction.  I decided to improvise with honey (which has crystallized into a thick paste), boiled on the stove with water until syrupy. I asked about vanilla. They got very excited and said, Yeah! We have! We have!

We gathered the next morning with the ingredients for eggs in a basket, and they stood around the stove ooooh-ing and ahhh-ing as I cut holes in the bread, cracked an egg inside, and flipped each piece of bread like a pro. We all enjoyed, and it earned a table-wide applause. 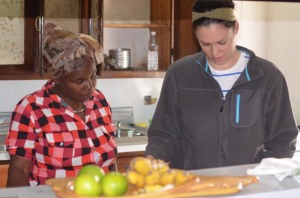 The next morning I woke up, and the team was assembled in the kitchen as they had been the day before, but this time with the ingredients for French toast proudly displayed on the counter: eggs, bread, milk and vinegar. Wait, what?!  I picked up the vinegar and looked around like, What’s going on here? Everyone smiled and said, Yes! Yes! Vanirra!  It turns out, our accents combined with misplaced emphases, plus all the interchanging ‘r’ and ‘l’ sounds make vanilla sound like vinegar. 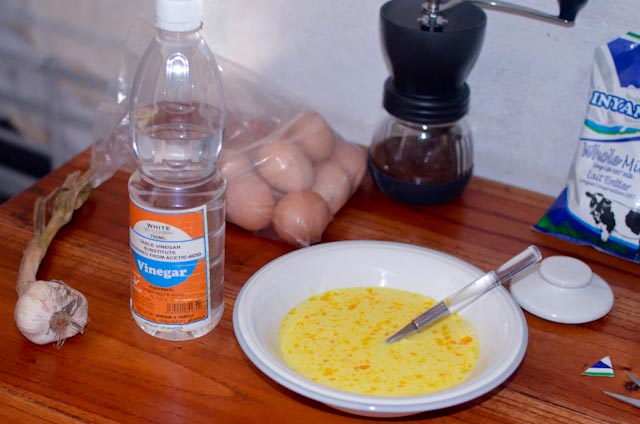 They were crushed, and also laughing. They had no idea what vanilla actually was, and we had no electricity to show them on the Internet.

In the end, we made some spectacular French toast with plain old milk and eggs, and I sprinkled a tiny bit of sugar on each side as it cooked. We water boiled the honey into syrup, and we sliced sweet bananas on top. Five of the six present loved French toast, and report they’ll make the breakfast for their families this weekend. Score! Anastasi, however, doesn’t drink cow’s milk, so she showed up at the table ten minutes later with her very own self-prepared Egg in a Basket. Double score!

In other news, no electricity and straight rain all day.

But we did accidentally stumble into a student choir in the dark. We heard this music in the distance as we were sitting on the front porch, and we and set out to find it. We found it in a dark classroom.  The high school students were practicing at the end of their school day, and the lyrics (as translated to us by one of the students) say something like, “Don’t be afraid, I am your God” and “In life there will be struggles, but I have died so you might have life.”

And finally, I leave you with some ‘l’ and ‘r’ exchanges that gave us pause…