Well, there I was feeling all homesick for some fall in the Midwest—pumpkins, leaves, jackets, football—or at least a little Halloween fun in New Orleans, when lo and behold, I walk into the kitchen and they’re all carving  grapefruits.  They did it just like a pumpkin: cut a little hold in top, reached in and pulled out the insides, then very carefully, using gigantic knives with no handles and teeny little fingers and grapefruits, carved out spooky little faces. Then they put a candle inside, tied some ribbon to either end, and hung them on the doorknobs to greet trick-or-treaters, who don’t come on October 31st. They come on November 1st and 2nd for All Saints and All Souls days.  They even have a creepy little version of trick-or-treat: Eshpasha pa la calabera, si no me das te da cagalera.

Translation: Special porridge for the skull, but if you don’t give me, it will give you loose stools. Usually, then, the villagers give the kids some porridge and sweets, realllly wanting to avoid those loose stools.

On All Saints Day, they light little candles for the kids and babies who have died, and place the first plate of food they cook on the table next to the candles and wait for the steam of the food to go to the souls of the babies. After about half an hour, they say, “Okay. The souls are finished eating. Now it’s time to eat!”

They also place one plate of food and one little black candle on a chair for the anima soula: the lonely soul.  Each person gets a plate of food, including kids who come to the door, and a special plate is always set aside for the lonely soul.  The very next day, on All Souls Day, they do the same thing for adults who have died.

Also, we’re out of water again. The water went out Friday night, and by Sunday night—with no clean dishes, no reserve water in the drum and nothing to bathe with, people started asking around.  Apparently a pipe broke. I suggested we try to wash some dishes with the maybe 5 liters of water we had left in the drum, but Antonia said it wasn’t clean.  She said we have to be careful because these are the times when people, especially ones with babies, are desperate to use any water they can find to wash and cook and bathe, and people start getting sick from the unclean water.  Point taken. Taking a shower now costs $2.50 in 1.5L of Crystal water: 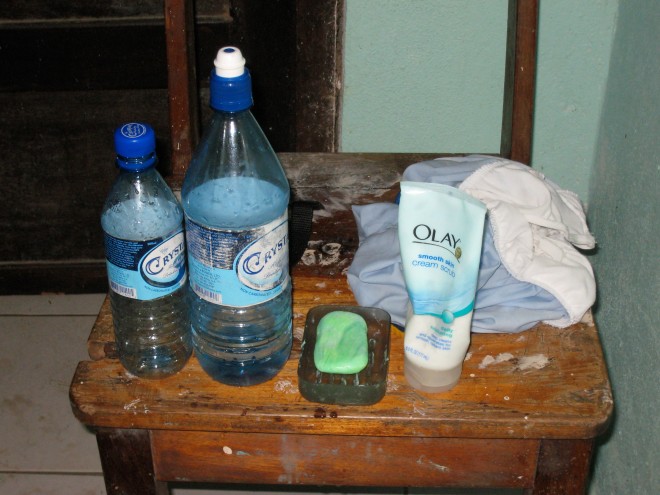 Update: it poured all day. Everyone ran outside with soap and shampoo and bathed, right there in the front lawn. I really wanted to lay all the dishes out on the grass, too, but I didn’t think of it in time.

January Moved to Belize. *Carry-on bag wouldn’t fit in the overhead compartment. Attendant made me take out bulge on top, which happened to be a Ziploc gallon-sized bag of underwear. Held underwear on lap for duration of the flight.

Lived on an Iguana reserve. Learned how to do laundry with a hose. Experienced Belizean wedding and funeral in the same week. Set out to teach everything I knew about conflict resolution, drugs, and AIDS. Learned everything I know about love. Got accepted into grad school.

February Caught a parasite, hiked to the top of a ruin, swam in a cave, experienced my first Belizean election and confirmation. Fought a piñata. Lost.

March Overcame fear of spiders. Discovered a new love for choco-bananas. Played with a monkey. Met real Guatemalan Indians in Guatemala. Bought skirt from them. Watched the Ruta Maya river race. Said goodbye to the Caribbean. Understood that life would never be the same.

April Got a niece! Heart opened a little wider. Fell in love with her.
Turned 27. Panicked. Cut my own bangs.

May Got another step-family. Danced! Celebrated! Laughed!
First laid eyes on my new city, New Orleans. Stabbed my foot with a parking lot spike.

June Went back to work at Boys and Girls Club. Happy to find that I still loved the kids. Got shingles. Thought I was dying.

July Sold everything I owned on Craigslist. Moved out of Fort Wayne (ten years!) Received Carrie Bradshaw as a parting gift.

August Moved to New Orleans. Found the two-story target, which I had previously thought was an urban legend. Took a family vacation to Destin. Came back. Became acquainted with city life. Loved it. Went to Tulane for student orientation after a month of waiting. Got evacuated for Gustav at lunch.

September Stayed evacuated for two and a half weeks. Went back to school. Dropped ten pounds for lack of friends.

October Made friends! Gained ten pounds. Heard that Taylor Fort Wayne would be closing. Felt orphaned. Dressed up like a ninja and fought pirates on Jackson square.

November Watched history unfold in the TSSW building with snacks and wine. Found out Bry and Jess are pregnant again. Went to Belize. Delivered school supplies. Painted a cafeteria. Provided flood relief with two armed guards on the Guatemalan border. Became acquainted with Big Mac and Quarter Pounder, the tarantulas. Realized I had not overcome fear of spiders. Had the sweetest reunions I could ever imagine at San Marcos School.

Learned that a plan is usually unfolding around me even when I am not still or patient enough to see it. Discovered that if I feel lost even for a second, all I have to do is ask for help. Understood the beauty in a prayer that goes, “Hi God, I’m an idiot and I don’t trust myself. Could you make this one clear for me?” Trusted completely. Found out I am purposed. Convinced Tulane I am purposed. Doing last semester internship in Belize!

Halloween in the Orleans: A picture monologue

Me- you rode your bike here?
Will- yeah
Me- as peter pan?
Will- yeah. high school kids kept yelling fag.
Me- I can totally bust into this ATM with my ninja star

Pirates vs Ninjas: the final showdown

Excuse me, do you guys know where all the Ninjas are?

Me stretching with the ninjas

Lined up and ready at the stroke of 5…

In case you ever wondered what ninja shoes look like

We came to win

(I’ll scale the wall and drop down on all the pirates.)

The Fight on Jackson Square

Pirates won- big surprise, since there were 50 of them and 8 of us.

Scrounging for candy on the parade route

Costume Change: Attacked by a shark on Frenchman St.

Me: look at my friend Shea. She sure does look delicious, yes?
Shea: oh God. Somebody get this shark away from my face.

Other: Fight will be filmed and put up on youtube… if you don’t want to be identified later, wear a mask or cover your face. Do NOT interact or interfere with camera crew.

Disclaimer: Please do NOT bring any real weapons or anything that could potentially hurt someone or get you arrested. We want to have fun and pretend to fight. Do NOT actually hit ANYONE with ANYTHING (including your fist).