Before the Cambodia Issue comes out in a few days, I wanted to link to some of the articles I wrote for the Rwanda Issue, because many aren’t posted on my personal blog.  They live on the World Next Door magazine app, but are also available online.

“There is just no place for me in Africa.  Through friends and textbooks and CNN, I understand Africa has complicated needs and a million qualified people already… read more

“This is forgiveness, I thought. Not emotionally safe at all. Against all the “normal” forgiveness rules, right in the middle of his broken heart. Why? Because God told…  read more

“Well, hello there! So you’re interested in learning about Rwanda’s history? Great! Have a seat, pour a cup of something hot (or cold?), and let’s chat! I’d love… read more

“What are your favorite travel apps? Why help 3rd world countries instead of those in need here? What do you see missions organizations doing wrong?” read more

“When I think of the phrase Community Service, I picture chain gangs in orange jumpsuits, kids on probation, and/or Lindsay Lohan. I also think of church and… read more

Fact #1: Gorillas > Humans It costs $750 USD to see the gorillas here. The joke in Rwanda is that gorillas make more than the humans. In fact, they say, if the… read more

The Coffee Process
A photo album

PLUS! There a bunch of other fun elements: Language Lessons, Jeff’s articles about a professional Rwandan Basketball player and a unique coffee plantation community, maps, interactive photos, lost in translation moments, must-have items for travel, the many uses of cassava, an info page about our Partner ministry ALARM, the personal story of the founder of ALARM and reviews of the book and movie As We Forgive. It’s jam-packed, and all right here. And it’s Rwanderful.

When I think of the phrase Community Service, I picture chain gangs in orange jumpsuits, kids on probation, and/or Lindsay Lohan. I also think of church-wide and campus-wide calls for neighborhood clean-up twice per year and scrunched faces of high school seniors trying to recall any act of community-oriented behavior that might pass for service on college applications.

But what if once per month our entire (adult) nation—all 240 million of us—served our neighborhoods for three hours. You, working on things where you live, and me, working on things where I live. Maybe on my cul-de-sac we weed all the cracks in the sidewalk, and on yours someone edges all the yards. Maybe we trim up our section of the Monon, or dig a little ditch so the water doesn’t pool in neighbor Frisky’s backyard. Maybe you rip out that old lady’s bushes that died 8 years ago (the bushes, not the lady) because they are an eyesore and remain a rusty-colored fire hazard year round. Maybe we all get together and chop up each other’s Christmas trees and then divvy up the firewood?

Pretend it was mandatory, but only sort of.  For example, you wouldn’t go to jail if you didn’t participate, but the social pressure was so high that you could be fired from your job or excluded from social events if you were a known non-attender.  What if this was so important that everything else was closed during the community service hours—gas stations, grocery stores, even Starbucks! No doubt, some people (who are accustomed to individual freedoms that protect against mandates providing for the greater good at individual expense—in this case: time, sweat, convenience and profit) will jump straight to the dangers of socialism and form a political position. No, of course I am not talking about you, silly. I’m talking about those other people. But let’s pretend this stayed purely community-based: entirely organized, monitored and carried out by the community.

It would be called Umuganda.

In Kinyarwanda, the day is called Umunsi w’umuganda, meaning “contribution made by the community” and is designed to be a day of country-building by the citizens themselves. So, on the last Saturday of every month, all able-bodied persons above the age of 18 and below 65 are expected to participate in volunteer community work in their neighborhoods for three hours. The start of this practice goes back to colonial times and is upheld today.

Everything is closed during these three hours, including shops, markets, and public transportation. People are seen everywhere cleaning streets, cutting grass and trimming bushes along roads, repairing public facilities, or building houses for vulnerable persons. People with particular skills offer their services for free on this day.  For example, doctors may offer free medical examination. This, of course, has Jeff and I thinking about offering free Physical Therapy and Counseling services once per month for three hours—could you imagine if we all did this?!

Participation is usually supervised by a manager or neighborhood chairperson who oversees the effectiveness and efficiency of community participation, or who can organize people of a specific need has been identified. Kids are not required to participate, but many times they hang around with their parents (sometimes ON their parents, literally) or play together off to the side, each watching the community work, like these guys:

Here’s the punchline: Rwanda has about 18 million hours of free countrywide community service each month, and about 5 million little eyes watching the community work. Convert that to full-time workers at 40 hours per week and $10/hour? That’s 103,846 full-time workers for the year providing $216 Million USD in labor hours annually- FOR FREE!  Also, 5 million little ones growing up understanding that once a month, it’s normal to pitch in and serve your own community.

The benefits of Umuganda are not merely economic. The day is intended to build community involvement and strengthen cohesion between persons of different background and levels.   One such a benefit is that people can access authorities to articulate their needs and voice opinions on various issues.

The labor cost from Umuganda contributes to national development programs.  By reaping the rewards of the volunteer labor and by having more capital to invest in the country, Umuganda has contributed to the growth and development of Rwanda.

– The Rwanda Governance Board

Now. I know what you might be thinking. These numbers are only true if most people show up. But most people do show up, because you can get fired or excluded in your community if you’re known not to attend, and because these current workers grew up watching their adult community work when they were little. Plus, it’s necessary and valued. In fact, when we crossed rain-distressed roadways or mudslides covering the path last week (Blooke- do you find the load? Do you find how the load has been destroyed by the lain?), people were quick to say, This area here needs Umuganda, and so it would be.

It’s also a time to visit, fellowship and encourage one another, per my plantation friend Eliane. What do you suppose was the method of attendance tracking in our village last Saturday? Word of mouth and penciled names on a folded piece of paper.

Everyone knows on which Saturday Umuganda falls, everyone honors the time, and even as we were trying to work out our own schedules last weekend, everyone was quick to remind us they would not be available Saturday morning because of Umuganda. The only people off the hook are those responsible for umuzungu (white people), because umuzungu are not citizens. We went, though. We wanted to see what it was all about.

Last Saturday, our community was digging a drainage ditch along the side of a remote mountain road to divert the rainwater to the creek and irrigation systems. Other groups weeded the side of the dirt road, packed in potholes they saw along the way, and hacked off overgrown grass along the side. Other villages were putting up stones along the same slopes and roads to prevent mudslides. 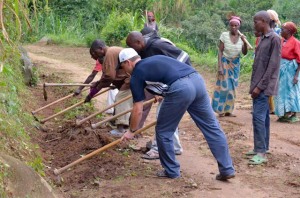 Prepare to have your mind blown. If this somehow happened in our country, we would have 720 million man-hours of community service per month. Even if we exclude the over 65’s because they’re all retired and stuff (though you should have seen these Rwandan Grannys rocking their hoes last weekend) we would still have 624 million man-hours of community work per month, 7.48 BILLION labor hours annually!

Here’s the sticker price. At 40 hours per week, it’s the equivalent of 3,900,000 full-time nationwide workers and at $10/hour, that’s almost 75 BILLION dollars worth of community work in our own neighborhoods, schools, roads and parks annually—FOR FREE!

In the meantime, who wants to have a Christmas Tree cutting party at my house?! We’ve got about 3 years worth in the Monon, and then we can move to Frisky’s yard and hack off all his weed-trees. Yes, that sounds good.  I’ll see you on the last Saturday in May.